What Is A Mastiff?

A lot of dog lovers out there would know that having mastiffs as pets make for a great choice. When it comes to needing a big dog for your homes, you will find that mastiffs would make for a really fun companion as they are very agile and playful.

While there would be a great number of breeds for mastiffs, the English Mastiff is the one that’s virtually recognized among the pack. In terms of mass, this dog breed is considered as the largest one among other dogs. Mastiffs possess a massive body, with a broad skull that gives its head a generally square appearance. Because of their size, mastiffs can be mistaken to be a fierce animal. It is a generally calm canine though, and would possess certain attributes that make it an ideal pet for many. These traits include being:

The traits of mastiffs are often related to that of humans, which makes them quite appealing for most people. One thing that makes it a challenge for owners though is to get their pet mastiffs out of the stage of being shy. While this trait is quite common, training mastiffs at a young age should be taken into consideration.

If you do not get to socialize your mastiff at an early age, they will have trouble developing skills that will make it easier for them to deal with people. Since they are naturally shy, mastiffs have a tendency to get very suspicious when proper training is not imposed. They can be agitated by the most random things when startled or backed into a corner, and can cause violent behavior to erupt.

English Mastiffs were considered to be the original breed of this dog, which is known to have descended from the ancient breeds Alaunt and Molosser. While the origin of the breed remains unclear, as there have been records that date back to the 15th century, the breed managed to end up extinct outside Great Britain after the First World War.

A Mastiff as a Pet

It is quite enjoyable to have mastiffs as your pet. Because they are naturally shy, they will become quite loyal and faithful to their owners. One really just has to exercise raising them properly, simply because shyness can bring out a lot of dormant and violent traits that are inherent in animals.

When it comes to socialization, you should make sure you work on it when mastiffs are still puppies. This will basically help them cope up with encountering strangers and other kinds of people, as well as different situations that can lead them to snap and attack.

One will find that well bred mastiffs are not normally the type to bite. When faced with a threat, particularly when they are with their master, mastiffs will place themselves in between their master and the threat and issue warning growls or barks, or can go up behind their master to do such. When attacked though, a mastiffs great strength can go and bowl over a person, which they will pin down until they are told to leave the person alone or when they have found that someone they trust will be able to take care of the situation.

Such loyalty and capability makes mastiffs an ideal dog for those who would want big and quiet dogs for their family. As stated earlier, owning a mastiff is fun, but make sure you take them and raise them up properly so as to not cause problems in the near future when they are adults. 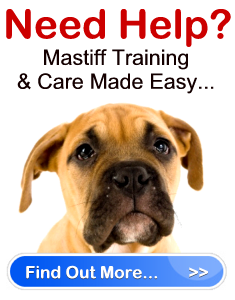